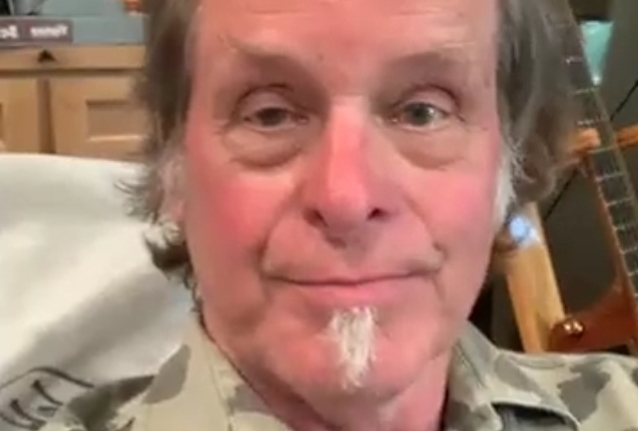 Ted Nugent recently announced that he was diagnosed with the novel coronavirus, and while some are wishing for his speedy recovery, others have publicly voiced a hope that he'll die of the disease.

The outspoken conservative rocker, who famously said that COVID-19 is "not a real pandemic" last December, addressed the online trolls wishing him death in a Facebook Live stream earlier today (Monday, April 26).

He said (as transcribed by BLABBERMOUTH.NET): "If you're on the Ted Nugent Facebook Live right now, you are some great, positive, good people, and we deserve each other. Not to be confused with the Satanic gang who actually celebrates other people's suffering.

"It's a very happy day for happy, smart, prioritized people. It's a very happy day — life, liberty and pursuit of happiness; we've got that shit down. But you have to know that there is a Satanic cult that is just demonic in their hatred and celebrating — literally celebrating — other people's suffering. I'm afraid that's the Democrat party. They are a Satanic cult. They literally throw gasoline on the fire of hurt, pain and suffering. Both literally and figuratively.

"To those of us that live a positive life, isn't it almost impossible to grasp the level of indecency and soullessness of the Democrat party and this freak president and his gang of America haters," he continued. "It's almost impossible to grasp except incrementally we witnessed the culture war metastasize into a cult of Satan. Isn't it something?

"Can you imagine anyone in your life putting forth any effort or energy to write a letter to someone saying, 'I hope you die.' That's what they've been doing to my family.

The 72-year-old pro-gun activist revealed his COVID-19 diagnosis in a video on April 19, saying that he had never felt so sick in his entire life. He also said many people had warned him against announcing his diagnosis.

The staunch Trump supporter previously referred to the virus as a "leftist scam to destroy" America's 45th president.

In the past, Nugent had repeated a narrative pushed by conservative media and disputed by health experts that suggests the official death count from the coronavirus is inflated. He had also mocked people who wear face masks, despite that both the CDC and World Health Organization have urged their universal use.

When Nugent first revealed his COVID-19 diagnosis, he described having a "stuffed up head," body aches and that he "literally could hardly crawl out of bed the last few days." "I thought I was dying," he said. He also called the virus the "Chinese shit," and reiterated his previous stance that he wouldn't be getting the vaccine because he claimed — falsely — that "nobody knows what's in it."

A board member of the National Rifle Association, Nugent has drawn intense criticism for his controversial past remarks, including telling then-president Barack Obama to "suck on my machine gun." He also made inflammatory remarks about Hillary Clinton, calling her a "devilbitch" who "hates everything good about America."

In a lengthy Facebook post in 2016, Nugent said Obama and Clinton should be tried for treason and hanged over their handling of the terrorist attack in Benghazi, Libya.